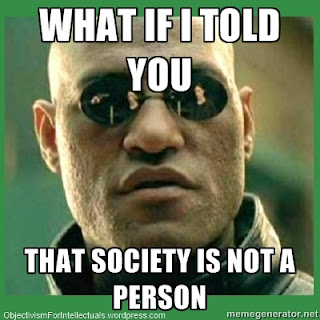 A division-of-labor society of human beings takes on a superficial appearance of interdependence. Different people do different jobs and rely on those in other specialties for raw materials and general trade. But unlike real interdependent systems, individuals in a society can exercise independent judgment and change occupations. An individual's job is not set for life in his genetics, but chosen by the individual. People can and do get promoted, change jobs, change career types, etc. Companies in a free market can and do expand into new fields of business.

If, in a hypothetical, laissez-faire capitalist society, all those who performed one sort of productive job were suddenly removed, then it is still possible for those in other professions to take over the job and maintain a similar division of labor. There might be great hardship for a while from such a sudden displacement, but since most other individuals would be able to adapt and survive, the society fails the test for interdependence. (This is to say nothing of the more realistic, gradual removal of people from an occupation, which a capitalist society can undergo with most people hardly noticing. In contrast, if lung tissue were gradually removed from your body, it would become harder and harder for your other organs to function, and your heart would not transform to replace the missing lung tissue.)

Moreover, not all activities undertaken by all other individuals in a society are valuable to a given individual. In fact, some are positively harmful, such as dishonest schemes, irresponsible investment plans, and theft. Since each individual has free will--the choice to think or not, to judge or not, and the capacity to behave destructively toward self and others--it is up to the independent judgment of each individual to determine friend from foe. Other people can't be dissolved into an undifferentiated mass of beneficence, let alone all be considered critical to one's own survival. (Easily observable facts refute this collectivist notion.)

If one individual is physically injured to the point of mental damage or paralysis, then that person can become genuinely dependent on other individuals who provide his care and sustenance. But this metaphysical dependence goes only one way: the injured is dependent on the uninjured, not vice versa. There is no "interdependence" here.

(2) Dictionary definitions are unhelpful: "interdependent - mutually dependent; depending on each other."
"dependent - relying on someone or something else for aid, support, etc." [Webster's College Dictionary, 1996]

Relying, in what way? Aid from whom? What happens if the support doesn't come from whomever? This definition is useless philosophically, since it can encompass everything from an appointment with one doctor out of many to have a wart removed, to being fed through a tube because you're paralyzed for life. The required definition is one of metaphysical (inter-)dependence, which is philosophically significant, and is the definition I gave at the start of this article.

America Before The Entitlement State

The Nature of the Morality of Rational Egoism: Short Notes

On Fairness and Justice: Their Meanings, Scopes, and How They Are Not the Same

Values Are Relational But Not Subjective